Today is the day of THE big XC race - the Swedish Vasaloppet!

So, who will be doing the final waxing of their skis and donning their lycra and grabbing their poles for this year’s Vasaloppet? Well, despite the demanding physical fitness required it’s not just a race for professional cross country skiers - amateurs will also there by their thousands. For these participants though, along with the opportunity to test their courage and stamina to the max, they are also there to do some star gazing – looking out for the big names and personas of the Nordic Skiing scene.

One of the most famous  and most successful competitors of the Vasaloppet in the last 10 years is the local Swede: Daniel Tynell. Today, as the skiers converge on the Vasaloppet venue, we would like to pay homage to him as one of the event’s stars and (as you can see in the photo) a fan of ONE WAY’s poles! 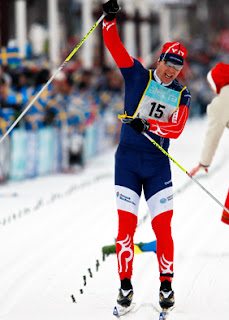 Per Daniel Tynell was born in 1976. His hometown Grycksbo is located in the region where the Vasaloppet is based (which is handy to give him some degree of a good ‘homeside’ advantage).

He is a Cross Country skier who specializes in long-distance runs and has won the Vasaloppet an impressive three times (2002, 2006 and 2009).

He will be competing in the 2013 Vasaloppet so we wish him the very best!

http://www.oneway.fi/news.html
Email ThisBlogThis!Share to TwitterShare to FacebookShare to Pinterest