Vasaloppet 2013 – Norway takes both the mens and womens line honours


The Vasaloppet is over for another year, and as always the event saw many heroic efforts and finish line crossings.
14,706 people competed – including H.R.H Crown Prince Frederik from Denmark! Another special competitor was Bengt Eriksson who was the event’s oldest participant being  82 years of age – achieving his 60th finish at Vasaloppet!
Our ONE WAY athlete, Daniel Tynell, and his compratiot Jens Eriksson, both from the local region of Dalarna, set the pace of the race very well and were part of the six men leading group just before the end of the race.
After a hard fight against each other in the last minutes, Jörgen Auckland (of Norway) had the best end performance and won the Vasaloppet 2013. It was his second victory. Daniel Tynell finished in second position, just two seconds behind the winning time of 3.50.48h. 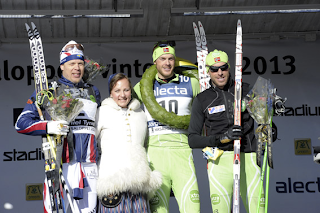 In the womens  class, Laila Kveli (also a Norwegian) won the title. She crossed the line with a comfortable margin of more than one and a half minutes in front of the second place getter, Seraina Boner of Switzerland.
As with previous years, the Vasaloppet was a great success and showed off the excitement and beauty of cross country skiing as well as Sweden’s stunning nature and landscape. We look forward to next year’s event already!
Email ThisBlogThis!Share to TwitterShare to FacebookShare to Pinterest