Nordic Walking in the Austrian Alps

No comments:
Email ThisBlogThis!Share to TwitterShare to FacebookShare to Pinterest 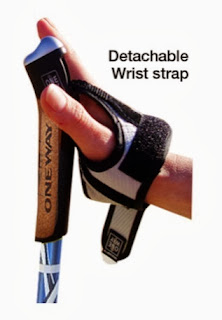 The significant difference between the two poles is the wrist strap. The Nordic Walking pole has a strap (some call it glove) that is attached to the grip.

The second reason for a proper wrist strap is lies in the Nordic Walking technique – once you push your body past the pole forward, you need to let go of the pole grip to get the pole further back behind the body and for the pole to become an extension of the arm (see picture).

Note: Very few Nordic Walking poles come with detachable wrist straps. While the ability to detach the strap is not essential, it is very convenient to push a button to have the hand free to grab a water bottle or keys or to wash the wrist straps after extensive use for hygienic reasons.

Trekking poles have a variety of grips, many of which are designed for comfort (see pictures) because the trekker will use these to transfer body weight onto the pole which helps to share the load and provide some stability. In general the trekker is not trying to push themselves forward in the way Nordic Walkers do. Therefore they plant the poles in front of them at a much more upright angle.

Note: Trekkers / hikers often use only one pole – we’d not advocate that as it can cause in-balance and back discomfort.

Another difference is the make of the shaft; while most trekking poles are adjustable to be able to be packed away and to be adjusted for different terrain, the ideal Nordic Walking poles are fixed length, providing more strength and better swing abilities. Whether for trekking or Nordic Walking, the fixed length poles are the preferred option – except of when travelling extensively and not wanting to check in poles at the airport.

As for the shaft material for both, Nordic Walking and Trekking poles – generally it can be said, cheaper (price and quality) poles are made from aluminium or fibre glass, more expensive (better) poles are made from a carbon mix up to 100% diamond carbon (used in cross country skiing world cup).

For more information contact My Nordic Sports on 1300 791 740 or email info@mynordicsports.com.au.

Nordic World Ski Championships – The Winners and the Competitors in 2013


Last Sunday the 12 day Nordic World Ski Championships came to an end in Val di Fiemme, Italy.
The Championships were dominated by Norway winning 8 gold, 5 silver and 6 bronze medals. France and Russia followed in second and third places respectively.
The Swedish XC-skier Johan Olson won the glorious ski marathon race, which was the last race and grand finale of the games. Our ONE WAY athelete, Dario Cologna, finished the 50km marathon in second place BUT as a result of winning the 30km race a few days before, has claimed the title of World Champion. Well done to Dario and to ONE WAY!
The most successful individual participant was Marit Björgen. The Norwegian Ski star won four gold medals across the cross country-competitions.
In the ski jumping events the Austrian Team dominated and achieved the glory (which we are particularly thrilled about). Germany did well and came in second, with Poland coming in with third place.
As for the Australian cross country ski team, they competed well and gave their best but were no threat to the superior European Nations. (They also looked great decked out in their ONE WAY apparel). And as all good sports is about - it’s the taking part, courage, determination and effort that counts.
We are proud of our Aussies – well done to: 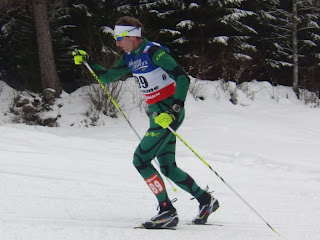 To view more photos of our Aussies in action – go to the official Australian XC-Skiing website: http:// ausxc.com/