“Cross Country? Ski Jumping? Nordic Combined? What are they talking about???”

To find out what each of these sports look like and who is the international competitor who is related to one of us here at Nordic Academy, read more…


Cross Country (also called Nordic or shown as XC) Skiing is a form of ski touring across snow covered terrains using skis and poles to pull and push your body smoothly along the snow. 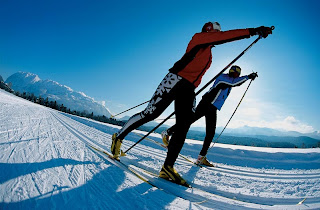 The athletes compete in sprint races (< 1.4 km) and long distance races ( 5km – 50 km), which includes Sprint, 15km and 50 km races for the men and Sprint, 10 km, 30km events for the women. The ski stars will perform either the classic or the freestyle technique.
Another interesting competition is the relays of women and men.

Cross Country Skiers are known for having (on average) the largest VO2 max scores, which measures aerobic fitness, than any other sport – including swimming or running. The reason for this is thought to be that the lungs have to work extra hard due to the cold air that they are exercising in.

Ski Jumping is a winter sport activity where skiers go down a take-off ramp, jump and try to land as far as possible down the hill below.

One of the most famous Ski Jumpers is ‘Eddie the Eagle’ who competed in the 1988 Calgary Olympics even though he was an inexperienced (and fearful) novice to the sport.

Another special ski jumper who is very close to our hearts here at Nordic Academy is Balthasar Schneider of Austria.

He is Patrick’s god son, and was competing on the international circuit 10 years. He is now being succeeded by his younger brother Sepp (in the Nordic combined) – so watch out for him in the future!


Nordic Combined is a combination of the two sports explained above. To excel in this sport is very challenging and requires all round abilities as you need the strength, balance and plyometric abilities of a Ski Jumper, as well as the extreme aerobic fitness of a Nordic Skier. 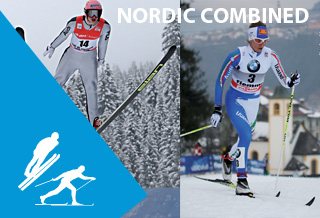 The most successful competing countries and the ones to watch out for in the upcoming Championships are Austria, Germany, Norway and Finland.
Email ThisBlogThis!Share to TwitterShare to FacebookShare to Pinterest